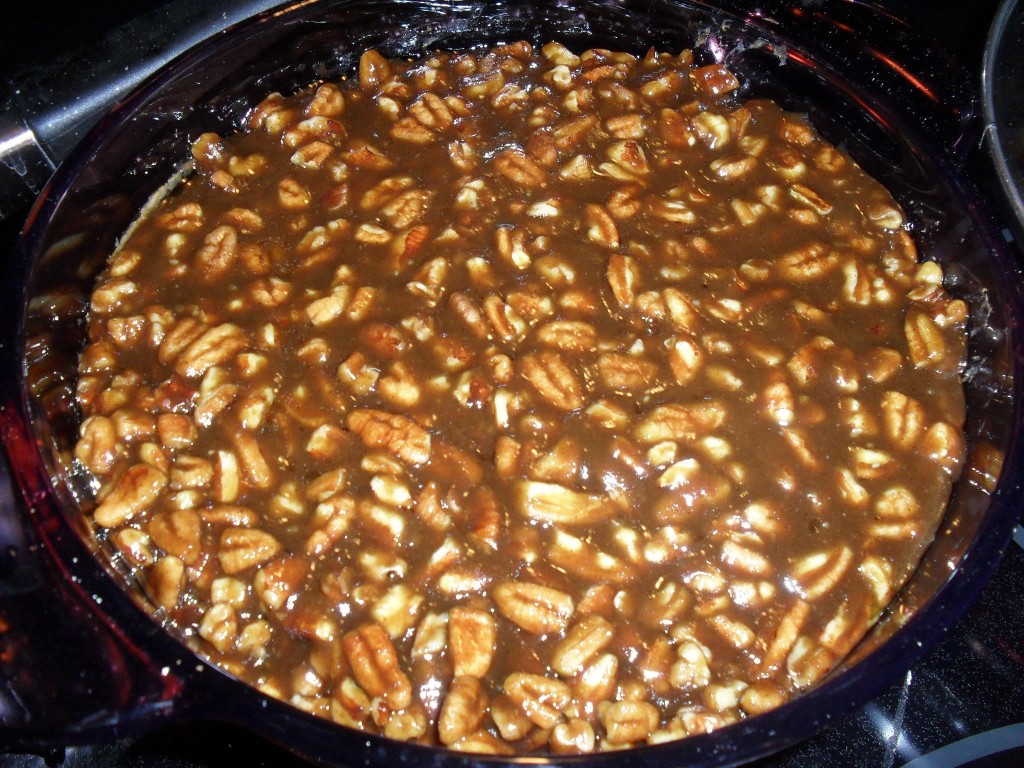 An American Thanksgiving Day celebration is not complete without sweet potatoes or yams.  After years of serving just baked yams and butter, this casserole recipe has taken over as THE favorite to include on the dinner menu.  I have been told it is better than the Cracker Barrel recipe.

It typically makes (12) ½ cup servings, but can be easily scaled to fit any number of servings.  It can be made ahead of time, as much as 2 weeks in advance, and frozen until needed.  However, the best result I have had is making it a day ahead and serving it freshly heated.  If I use more potatoes, I increase the pecan recipe proportionately.  If I use fewer potatoes, I prepare the pecans as listed and just put more topping on the potatoes.

The secret to the success of this recipe comes down to two things: using baked sweet potatoes rather than boiled, because baking the potatoes in their skin makes them sweeter;  and preparing the pecans in a special way.

Wash the sweet potatoes and bake them for 65 to 75 minutes at 325 degrees F on an oven rack.  Place a baking sheet on the rack below potatoes to catch any juices.  Test for being done by inserting a serving fork or sharp knife, which should be clean when removed from a fully baked sweet potato or yam.  Remove cooked potatoes from oven and let cool to touch.  When cooled remove skin by peeling with the edge of a semi sharp knife, trying to avoid taking any of the potato meat with the skin. Set aside.

(Alternate cooking method is to peel, slice and boil on the stove top until cooked….Just not as sweet as baked.)

After putting the potatoes in the oven to bake, start preparing the pecans.

In a small saucepan, combine the syrup, ¼ cup of the light brown sugar, cinnamon, nutmeg, and ginger and nuts.  Stir while bringing to a slight boil and remove from the heat.  About 20 minutes before the sweet potatoes have finished baking, spread the nuts on a non-stick baking sheet and sprinkle lightly with salt.  Bake in same oven as yams for about 15 to 20 minutes.  Remove and set aside to cool.

After yams are baked, cooled, and peeled, combine with the butter, the remaining ½ cup of brown sugar, and all the juice of the orange.  This can be done using a mixer, a food processor, or by hand with a potato-masher and a few hundred strokes of a wire whisk.  When mixed completely, place into a large casserole-baking dish, top with the nuts and a generous amount of orange zest.
To prepare to serve, with the turkey dinner, heat in a hot oven 400 to 450 degrees F oven for about 25 to 30 minutes, until the topping forms a crust.  (I share this oven time with my dinner rolls).

Remove from the oven and serve hot.